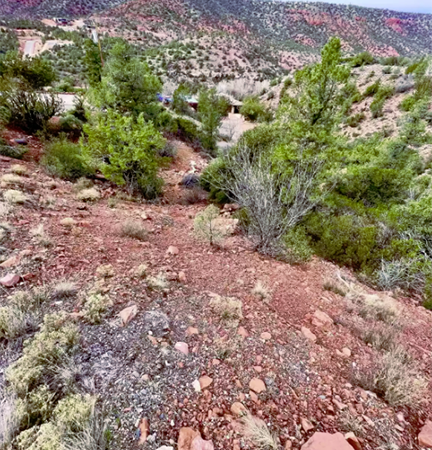 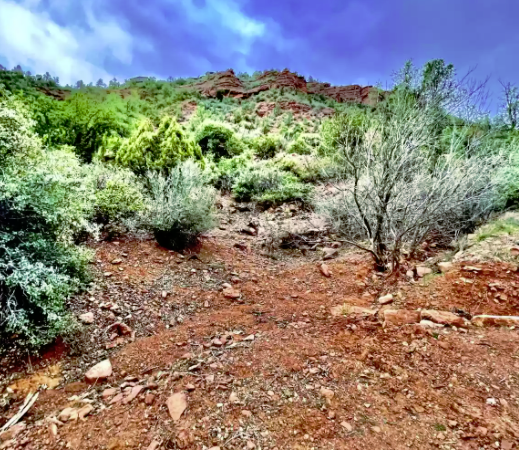 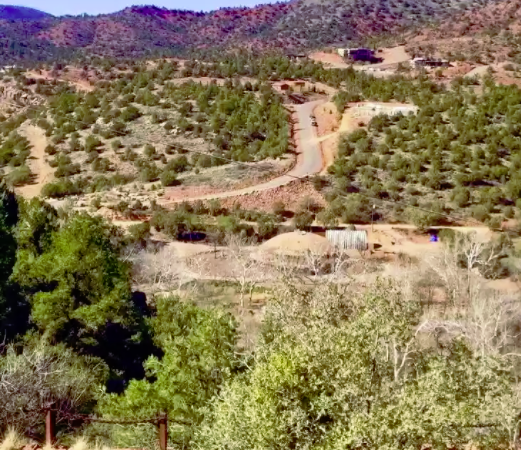 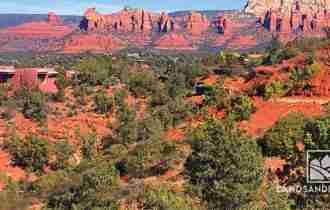 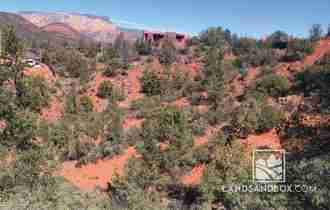 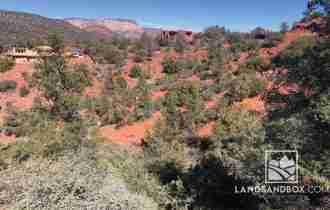 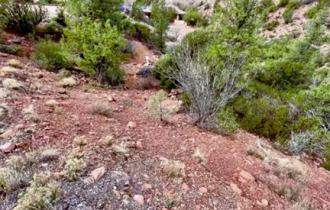 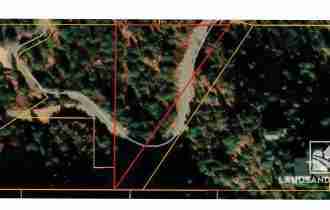 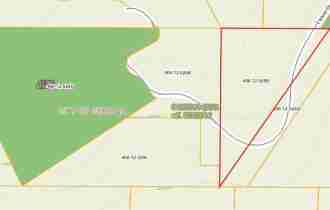 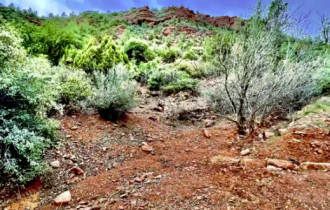 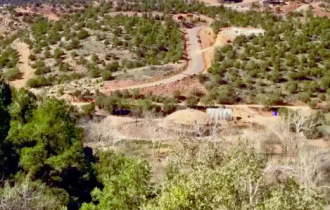 Build your Home on .85 acre with Stunning Sedona Views 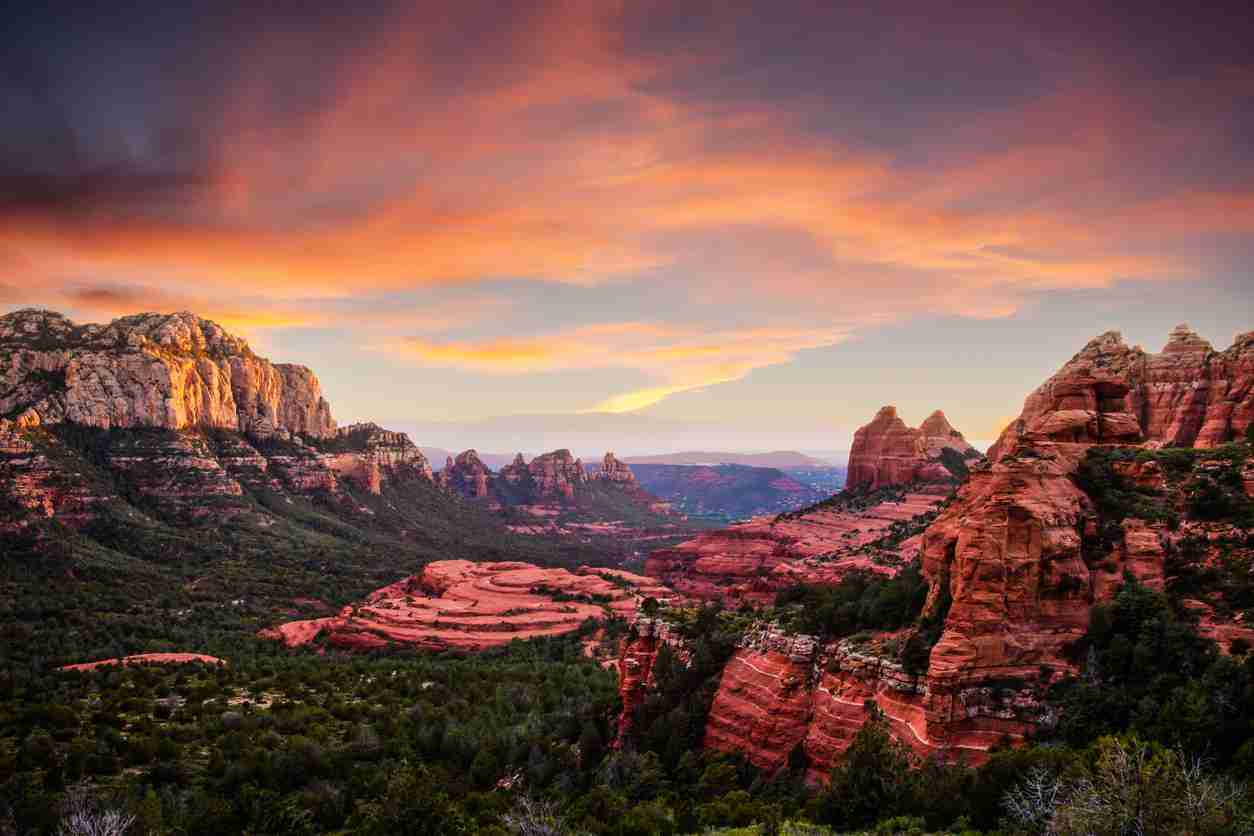 Sedona is a true oasis, a vacationer’s paradise in the middle of the Arizona desert. Here, you’ll find resorts and spas, canyons and red rock formations. Bell Rock and Oak Creek Canyon are great hiking spots, and the dramatic architecture of the Chapel of the Holy Cross is a religious experience itself. When the sun dips down below the horizon it introduces the best show in Sedona: the night sky.

Sedona’s main attraction is its array of red sandstone formations. The formations appear to glow in brilliant orange and red when illuminated by the rising or setting sun. The red rocks form a popular backdrop for many activities, ranging from spiritual pursuits to the hundreds of hiking and mountain biking trails.

Sedona was named after Sedona Arabella Miller Schnebly (1877–1950), the wife of Theodore Carlton Schnebly, the city’s first postmaster, who was celebrated for her hospitality and industriousness. Her mother, Amanda Miller, claimed to have made the name up because “it sounded pretty“.

Check out these 100 Things To Do in Sedona: https://visitsedona.com/things-to-do/100-things-to-do/ 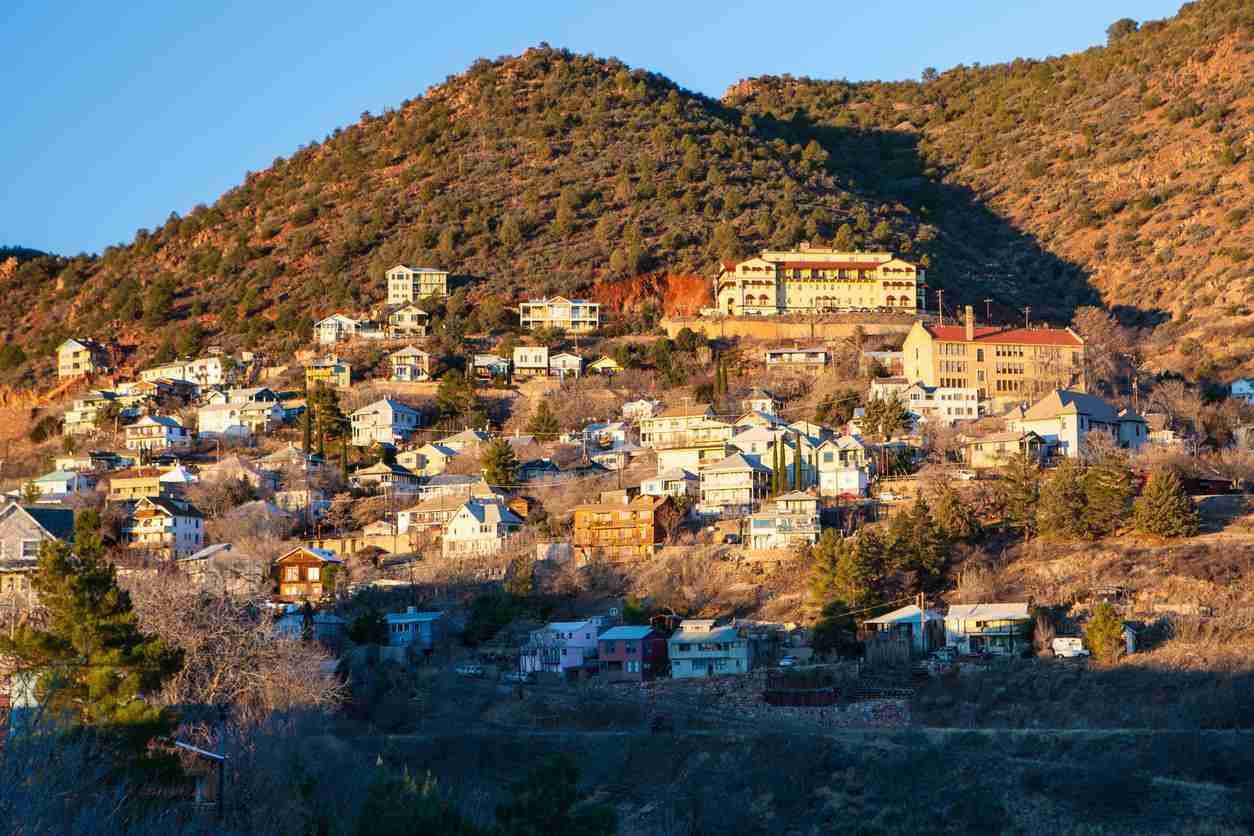 This former mountain mining community earned the nickname “The Wickedest Town in the West” during its heyday, when rich copper ore deposits attracted miners, merchants, madams and more to Yavapai County.

More than a century later, Jerome’s rough-and-tumble spirit has been tempered but not completely tamed, which helped the town narrowly escape a fate that befell many others that fell to ruin after their linchpin mines closed. Today, Jerome is known for being a hillside destination for visitors eager to discover more about the Verde Valley’s mines, wines, fine arts and spectral spirits. This town serves up its history with a side of humor: There’s still a Bordello on Main Street, for example, but the modern incarnation is meant to sate guests’ appetites for burgers only. Read on to discover more about what to enjoy on your visit to Jerome.

Downtown Jerome’s streets and stairways wend past several tasting rooms and bottle shops that showcase the viticulture of the Verde Valley. At least a half-dozen offer curated lists of wines or ciders, available by the glass, flight or bottle. Jerome’s restaurants tend to include at least one local brand on their menus, too.

The catastrophic fires and violent deaths from the town’s early days have led to Jerome’s “ghost town” status. Over the years, there have been several accounts of ghosts and apparitions that roam the town’s historic buildings and neighborhoods. Evening ghost tours and spirit walks introduce visitors to the local hotels, houses, hospital and high school that former residents are said to haunt.

The copper mines may have closed, but they’re by no means forgotten. Just above the former Little Daisy mine, what once served as the Douglas family mansion has been converted into the museum and visitors center for Jerome State Historic Park, which contains displays, demonstrations and tours related to the town’s mining boom. And throughout Jerome, placards share the history of both ruins and remaining buildings, inspiring renewed appreciation for the renaissance the town’s residents have been able to craft themselves. Turns out, all that rough tumbling revealed the gem that had been lying underneath all this time, ready to shine once again. 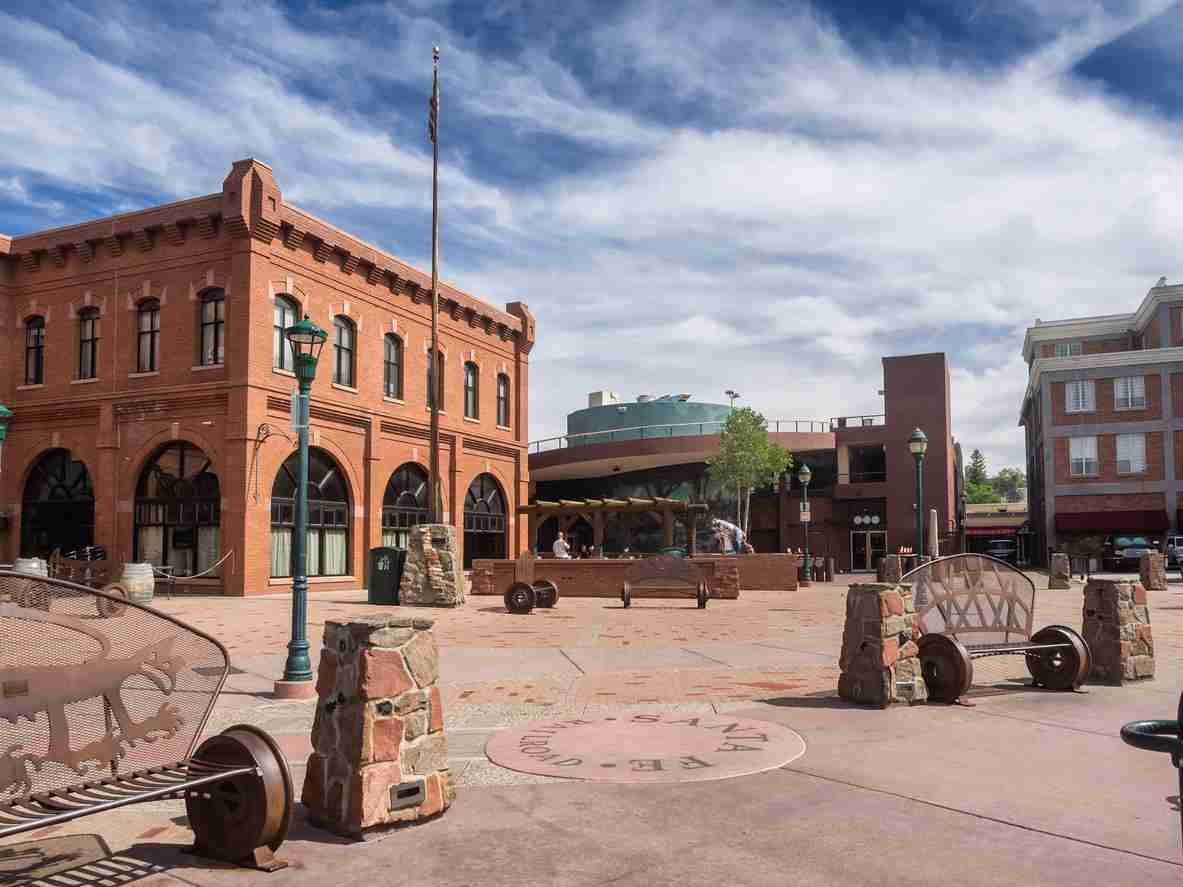 Enjoy all four seasons in Northern Arizona’s largest city — located along historic Route 66 just 80 miles from the Grand Canyon. Immerse yourself in the college atmosphere of laid-back Flagstaff. Visiting Flagstaff is perfect for getting outside and exploring historic sites. The city is equally well-known for recharging at local festivals and breweries.

Abutting Northern Arizona University, Riordan Mansion State Historic Park features a 1904 Arts and Crafts home owned by the Riordan brothers, from a prominent Arizona logging family. Flagstaff is the world’s first international dark sky community — and home to Lowell Observatory, where Pluto was discovered — which makes it ideal for exploring the night sky. Another otherworldly sight to see in Flagstaff is the cinder cone at Sunset Crater Volcano National Monument, which shook the earth around 1085. Before the volcano erupted, native Sinagua people lived there, but after their farmland was buried, some of them moved to nearby Walnut Canyon and Wupatki, where visitors can view cliff dwellings and ancient pueblos. Sinagua descendants, including Arizona’s Hopi and Zuni tribes, are represented at the Museum of Northern Arizona.

Arizona Snowbowl, a ski resort north of the city, offers both downhill and cross-country skiing and snowboarding in winter months and family-friendly activities in the summer. Closer to town, the Flagstaff Urban Trail System traverses more than 50 miles along nonmotorized shared-use pathways. Zipline, climb nets and balance on suspended bridges at Flagstaff Extreme Adventure Course, or meander around The Arboretum at Flagstaff, which sits on 200 acres within Coconino National Forest.

For music and tunes in autumn, join the fun at Pickin’ in the Pines for bluegrass music and Oktoberfest for beer, brats and polka. The monthly First Friday ArtWalk is when Flagstaff galleries, restaurants and businesses stay open late for special exhibits, performances and live music. In December, journey through Santa’s workshop at the North Pole Experience and ring in the New Year at the historic Weatherford Hotel’s Great Pinecone Drop.In Flagstaff, February is officially known as “Craft Beer Month.” Look for new flavors and events around town, but of course you can sample the suds from local brew pubs any time of year. Download the Flagstaff Brewery Trail passport, and once it’s filled with stamps, receive a free pint glass. Come summer, enjoy Flag’s 80-degree weather and the annual Blues & Brews event, with live music and kegs of the good stuff. 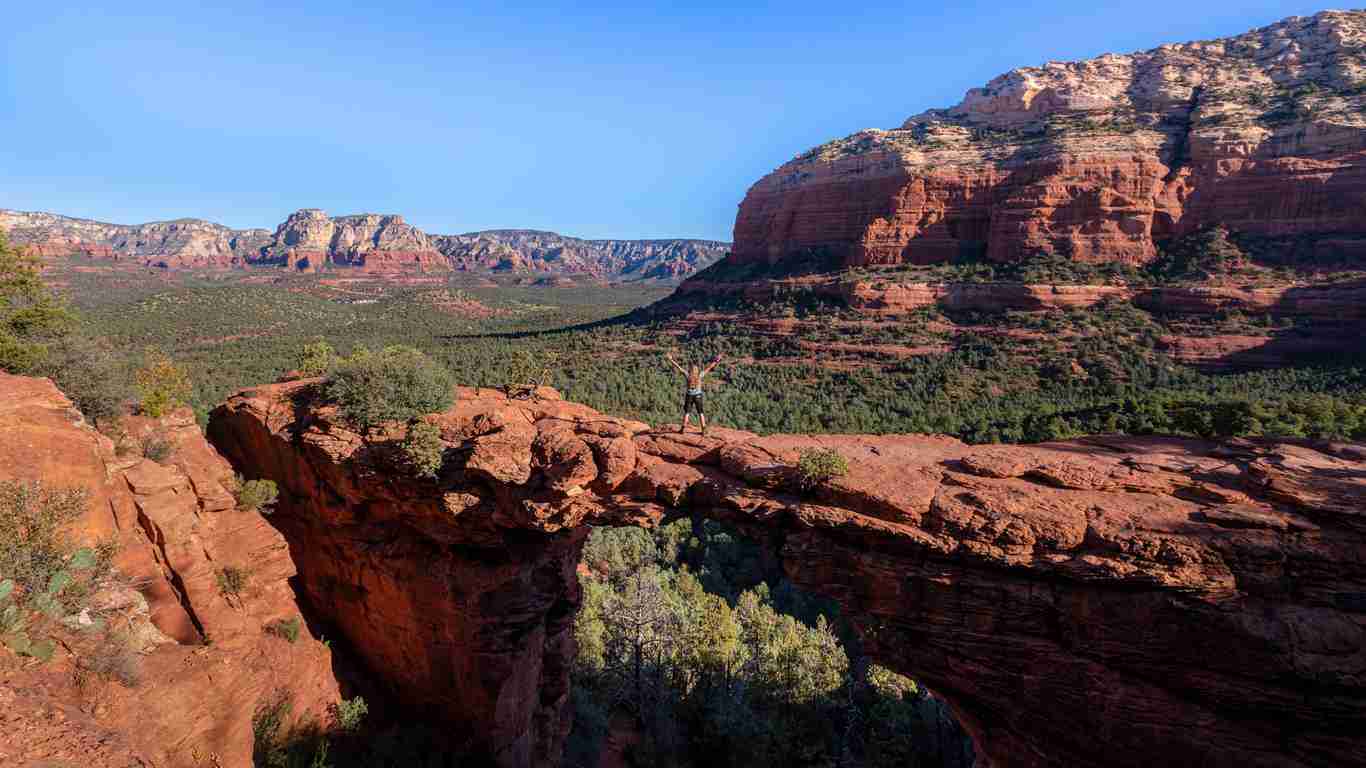 Surrounded by 1.8 million acres of national forest land and buttressed by four wilderness areas and two state parks, this is a landscape built for adventure. Angular formations, high mesas and rocky cliffs define the multi-terraced skyline. Forests are carved by a network of trails and ringed by feisty streams, all beneath a clear azure sky. So whatever thrill you seek—by water, land or air—you’ll find it in Sedona. Enjoy hiking, biking, ATVs, climbing, golf, fishing, and much more. Learn more here: https://visitsedona.com/outdoor-adventure/ 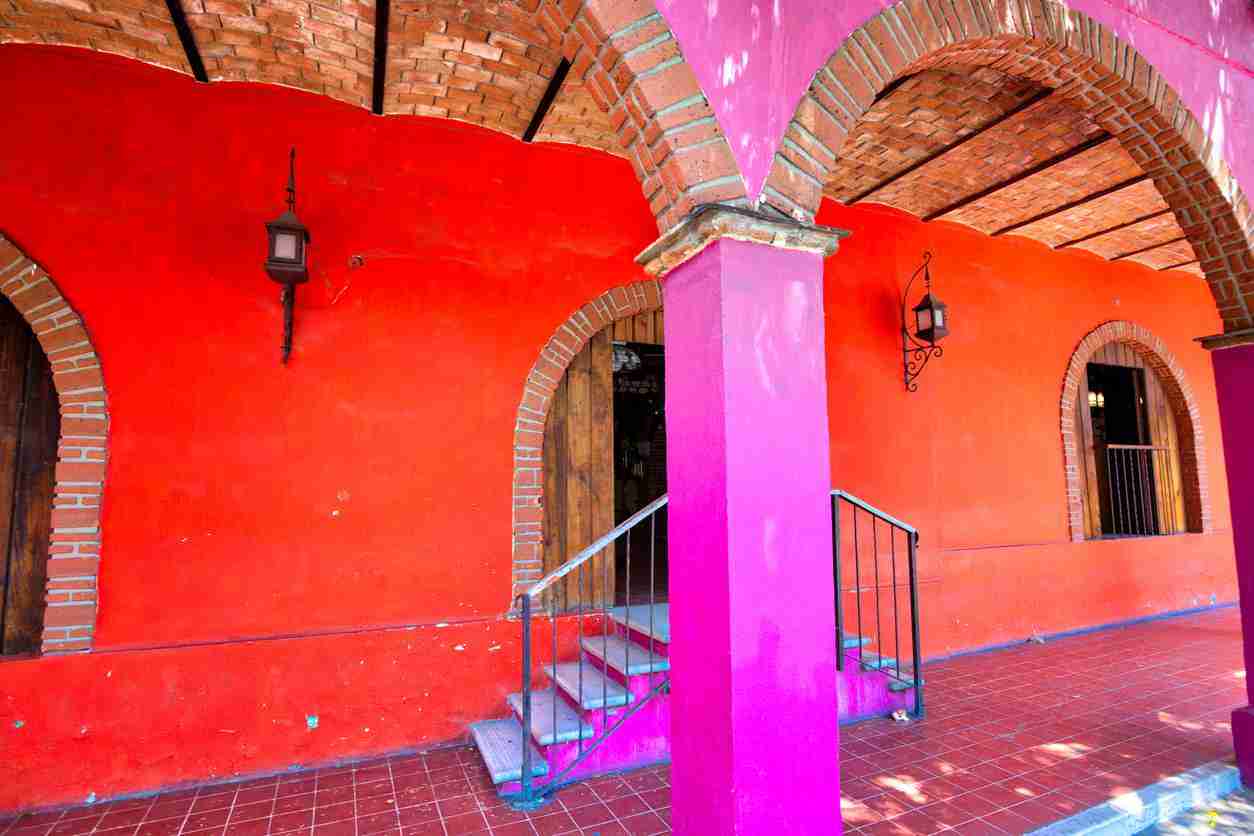 Sedona has a long and storied history with the world of art. There is a siren song to the red rocks that entices people with a creative vision. Max Ernst, a surrealist painter, sculptor and pioneer of the Dada Movement and his wife, acclaimed painter Dorothea Tanning moved to Sedona in 1946 when most of the roads were still dirt and gravel. Egyptian sculptor, Nassan Gobran, along with a handful of local artists founded what would become the Sedona Arts Center in 1958. A group of western artists as handy with a horse as they were with a paintbrush—Joe Beeler, George Phippen and pards—formed Cowboy Artists of America in a local saloon over cold beers in 1965.

Today, Sedona is home to hundreds of artists of every medium and aesthetic bent. It is a community of ruggedly individualistic expression, from cutting-edge contemporary to visionary, Native American to modern realism. This robust level of cultural activity helped foster Sedona’s reputation as a destination. Sedona rivals Santa Fe in its richness of the arts. Sedona mesmerizes artists, challenging them to capture its splendor.  For decades Sedona has been the defining arts town of Arizona—an enclave of unmatched beauty pulsing with creative energy.

For art collectors, Sedona is the mother lode. An incredible array of work is available from artists that are known around the world and others that are just beginning to make their mark. Over 80 galleries are woven into the fabric of the small town. Walk out of one and into the next. You’ll find them spread throughout Uptown and West Sedona, tucked away at Hyatt Pinon Pointe Shops, Tlaquepaque Arts & Shopping Village, Hillside Sedona and others strung along State Route 179 in such clustered concentration it’s become known as Gallery Row. 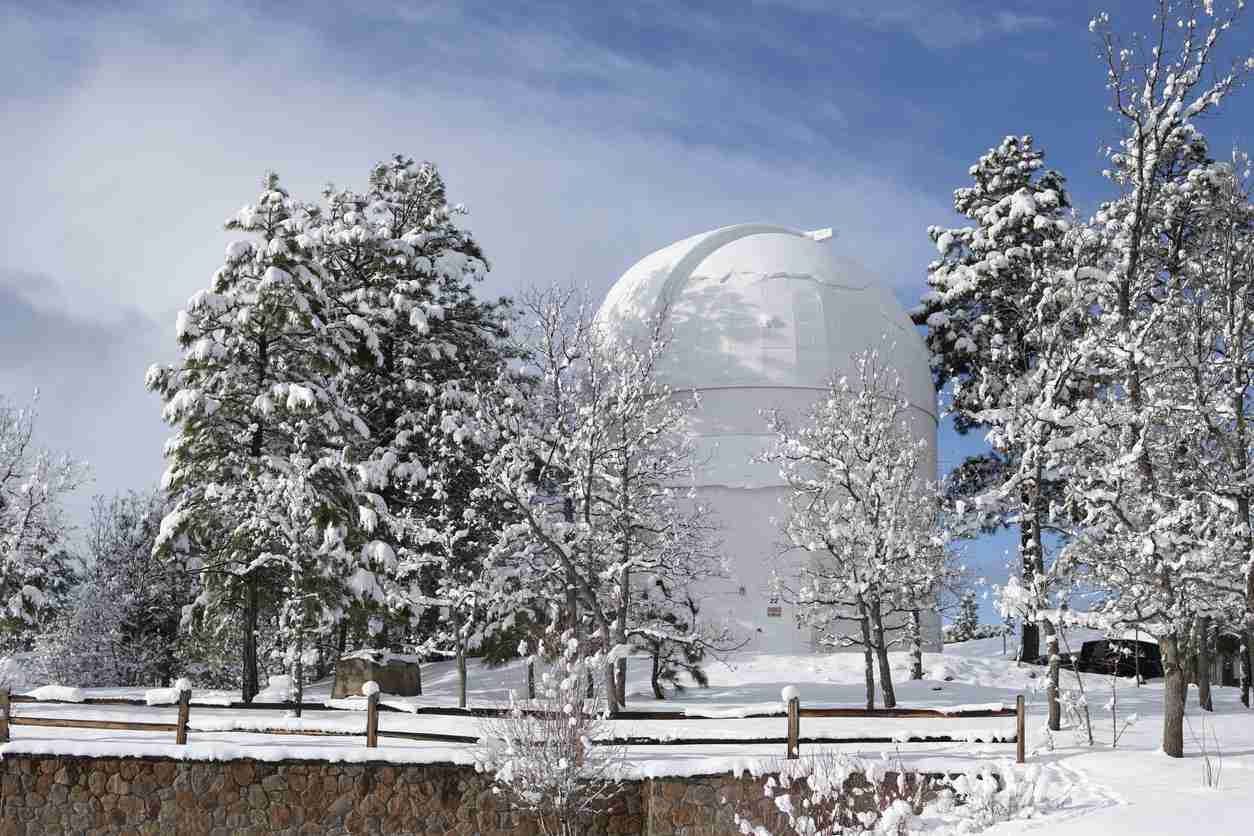 Although recently demoted to a dwarf planet, the 9th planet Pluto was discovered at Lowell Observatory in 1930 by Clyde Tombaughs. Founded in 1894 and one of the oldest observatories in the U.S., Lowell Observatory continues to be a research facility and instrumental in major discoveries including the first detection of the expanding nature of the universe, the rings of Uranus, the atmosphere of Pluto, moon mapping for the Apollo program as well as scores of others. The Observatory visitor center offers interactive, hands-on exhibits. Guided daytime tours that take visitors to the 24-inch Clark Telescope, built in 1896, the historic Rotunda library museum and the original 13-inch Pluto Discovery Telescope. Evening programming includes an open house at the Putnam Collection Center where visitors can look at historic items from the Observatory’s collection, films, science demonstrations, a constellation tour and evening telescope viewing. 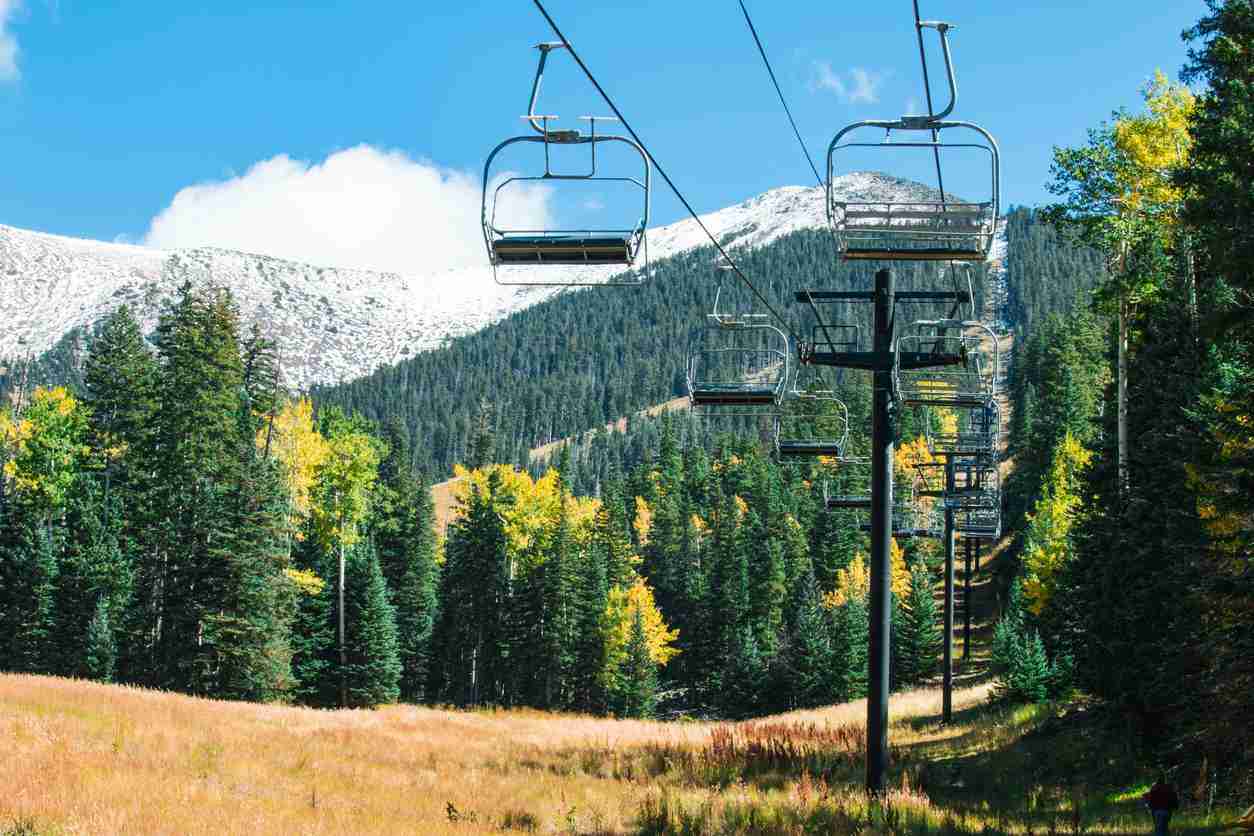 Perfect corduroy on bluebird days, untracked powder in the upper bowl, drinks on the deck of Agassiz Lodge, and epic views of the Grand Canyon. This is what you love about skiing and riding at Snowbowl. Home to Arizona’s longest ski season, over 260 inches of annual snowfall on average, and a state-of-the-art snowmaking system, Snowbowl offers the premier winter experience from mid-November through the end of April. The resort continues to undergo impressive capital improvements, including three new chairlifts in the past three years, an expanded rental shop, a new restaurant, and a pedestrian overpass. With the best learning terrain in the west and certified, bilingual instructors, Snowbowl is the perfect place for first-timers learning how to ski or snowboard. Plus, avid winter enthusiasts enjoy the 2,300 ft vertical rise, a variety of trails, three terrain parks, and premier tree skiing.